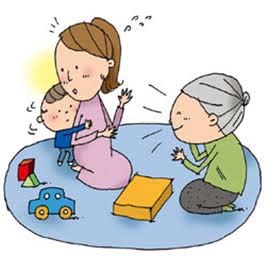 Stranger Anxiety or fear is a normal developmental stage, or sequence experienced in children. It can start around 6 months of age, peaks around 8-9 months and lasts till about 12 months, sometimes may be seen till 24 months.

One of the earliest developmental milestones a baby develops is recognition of the mother, and the baby is comforted by the mother’s touch, sound or smell.

Children are not born with the awareness of meeting a stranger, but experience it when they actually see strangers and seek protection from familiar people. Infants feel protected with the caregivers than unfamiliar people.

Though stranger anxiety is considered a part of normal development, it is believed that parents’ behaviour, especially mother’s anxious behaviour, has more likelihood of causing anxiety in children.

Stranger anxiety may present as the child burying himself in parents/caregivers arms or holding on to the legs, the child may start crying loudly or being fussy and would want to be picked up by the parent.

Managing stranger anxiety or dealing with it should be done patiently. The child’s feelings should be valued over the strangers’. The stranger can be well informed that the child has such feelings towards unknown people. Whenever any stranger is to visit the child, he or she can distract the child with a familiar toy. A calm tone of the person or a smile on his face can allay the child’s anxiety. The parent or the caregiver should try and hold the child’s hand to create a feeling of trust.

Gradual warming up technique by introducing the stranger in the presence of the parent always helps. Parents should try and take children to new places and introduce new faces frequently to overcome this issue.

Stranger anxiety usually fades away with time, and the parents should not get too worried about it. A pediatricians’ help may be sought if the stranger’s anxiety doesn’t improve or regress with time.

Sibling is the best gift parents give to their child. The bond between siblings is a beautiful one, but the rivalry between them is inevitable,  especially in the growing years. In simple terms, sibling rivalry is the competition and fighting or jealousy between siblings. It usually starts after the birth of the second child due to a sense of insecurity. Many factors contribute to sibling rivalry.

Each child in the world is different and has his/her own set of talents and interests. When one child feels that the other is getting more importance probably because of being more intellectual or gifted,  he/she may just attract the parent’s attention by picking up fights.

When there is no family time, a fight occurs. Even parents’ stress is also an important contributing factor. Hunger or boredom of children may initiate fights. Children with special needs may demand more attention and time of the parents leading to the feeling of being left over by the other one. The clothes or the toys of the elders sibling are usually  passed on to the younger one which is also a contributing factor as it happens in most of the households.

The children may show signs of anger like yelling, throwing or breaking things / lying, hiding, name calling and arguing, fighting or voicing feelings of envy. Since sibling rivalry usually starts after second baby’s arrival, adequate preparation helps. While the mother is pregnant, the elder one should be involved in all activities and preparations of the younger one like buying toys, clothes, toys, arranging the cupboard, decoration, etc.

The management of this rivalry may be difficult, but is not impossible. Let the child be himself or herself and express his or her emotions. There should be no physical punishment whatsoever. A good amount of family time spent together in playing games or having family trips often helps. No two children should be ever compared. Rather, they should be encouraged to do and enjoy things together like playing in the rain, doing pillow fights, etc. They should be asked to make greetings cards together for family members birthdays or special days.

Parents can try to spend ‘one on one’ kid time and talk about the negatives and positives of other sibling too.

BUT WHAT TO DO WHEN A FIGHT STARTS?

It is best for the parents not to get involved unless they need to intervene to prevent physical injury.

Parents interference may become habitual for the children and maybe looked upon as rescue.

Be calm and in control. Try to separate out the siblings giving them space of their own. Let them be!

Avoid favouring. Do not play blame game. You will realize that children will be together after a while.

A ‘green to red’ light strategy may be followed for management of sibling rivalry.

If we try to look at the positives, sibling rivalry teaches some values, feelings of compromise,  sharing, negotiation,  etc. which help the children in the long run.

Interestingly, sibling rivalry is not just a trait of homo sapiens, but also seen in other species. A black eagle mother lays two eggs,  the first hatched egg pecks the younger one, also the blue-footed booby bird. Even literature has examples of sibling rivalry, like three rivalrous daughters of Shakespeare and the story of Cain & Able.

I remember the days a few decades ago, when it was time to get our answer sheets after the exams.

Our hearts would go thumping with an extra lub-dup.

There used to be a cyclone inside till the marks were released. This tsunami of thoughts would last for a few minutes, a few hours, may be few days for some. A few would show that they are not interested and the rest would just pack the sheets in the bags which were square shaped those times.

I had forgotten those mid-school years but am experiencing the same cyclone when my daughter is in the same boat. I wouldn’t be affected by marks at this stage of life, but her sessions of crying and getting upset for 0.5 or 1 mark every now and then, would bring out the fire ball of anger from within her.

I would explain to her that a mark here or there would not matter in the long-run, but conceptual learning would do. Listening to this, my younger son had to tell her one day  “Didi just believe in yourself. “We don’t have to make a pickle out of the marks obtained” as mom always says.

I wonder why couldn’t our education system change over all these decades.

Learning can not be quantitative as someone has said, but the stakes are still attached to scores.

The short term memory is still regurgitated and evaluated. Would we ever be able to understand the concept of HOLISTIC LEARNING and “KNOW THYSELF”

Copyright by pedsvij.com 2019. All rights reserved.